I've been doing a little research on purchasing these and the best ones so far seem to be either ATF or WPG. I bought a cloth arm flag a few years ago off Service of Supply but I'm not sure if they are still doing them as I could not see any on their website. I know Dan will be test purchasing the brassard style arm flag from SOF for TROWBRIDGE (their cotton one is doggy do do). Anyone got anything to contribute? 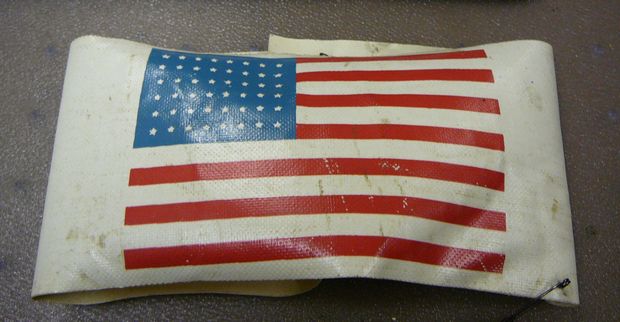 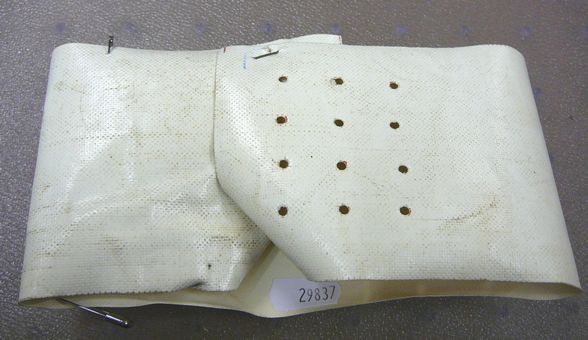 Hi Ian,
The below website I can recommend for arm flags and much more.

Re your comment about this style of arm flag for Trowbridge, Im afraid to say the arm brassards used in the MTO were not oil cloth they were cotton/muslin. So just an extended version of the arm flags we would know as being used by the 82nd in Normandy.

Thats the website I posted up for armflags and said they were not the correct ones?

Am i getting confused or missing something?

Well I have one of their oil cloth ones and I think they are a good copy.

Different flags are correct for different units in different time frames so it depends on what you mean mate by being not correct?

Tom Sainter wrote:Well I have one of their oil cloth ones and I think they are a good copy.

Different flags are correct for different units in different time frames so it depends on what you mean mate by being not correct?

Its just knowing the one for use in the MTO that i am having problems with they are all starting to look the same!!!!

Tom, for our 82nd MTO impressions can you confirm that it is the cotton/muslin brassard we should then be looking to get? Just that you then mention you had the oil cloth variety from that website and that they were a good copy that i think has confused us???

Ha Ha!!! Will bring it along for your judgement/amusement!

I think what Tom is saying is that for the MTO impression, the Arm Flags should be extended versions of the material / muslin flags, rather than the oilcloth variety posted by Murph in the initial post of this thread.

Tom Sainter wrote:Im afraid to say the arm brassards used in the MTO were not oil cloth they were cotton/muslin. So just an extended version of the arm flags we would know as being used by the 82nd in Normandy.

Are you sure of this though, Tom? The extended versions of the cotton / muslin Arm Flags you see in the MTO shots appear to be, and particularly the originals I have seen have always been theatre-made. If I remember correctly, this was done due to supply shortages in the MTO and so they were produced; this is another explanation as to why you see some units within the 82d using Navy Dual-Purpose parachute rigs too - there was a shortage of T5 Harnesses and Packs, and so the Navy D-P rig was used...

I could be wrong, though!

Hi guys,
I am sorry if I have caused some confusion I didnt relies I was answering a question on arm flag/brassards to be used in the MTO, I just thought Murph was after a good supplier for the oil cloth brassard for something else and I only pointed out this was incorrect in my opinion for MTO as a spinoff of Murphs statement. I have now read the posts in the WO for Trowbridge topic and understand why I have caused so much confusion, I am sorry again as I hadnt been on for a while and because I knew what kit I was taking to the event I hadnt bothered to read it till later on today. My bad

For Trowbridge our scenario is Agrigento airfield on Sicily, pre the jump on Paestum, Salerno, Italy so in my opinion the arm flag to be correct for this would be a normal cotton/muslin arm flag the same as we would use for the 82nd in Normandy (so not a brassard). I say this because I have seen pics of the 82nd defiantly in Italy with this flag on their right shoulder but I have not seen any pics of the cotton/muslin or oil cloth brassard. When I have access to my books shortly I will endeavour to put a topic together on the subject.

In my opinion the oil brassard was not used by the 82nd in the MTO at all, I have looked at the Sicily era pics that Ben has posted and the C47 pic I believe to be a cotton/muslin brassard as it appears it has been tied together to secure it around the arm similar to pic I have put below. The pic which has Gavin in (he too may be wearing a cotton/muslin brassard but I will have to check another pic I have of Gavin at a later date.) the chap in the foreground I believe is just wearing a normal cotton/muslin arm flag sewn on.
I do not know why or where these cotton/muslin brassards came from for the Sicily drop, indeed they appear to be all slightly different but they are all printed in the same size and shape as the sown on ones so whether particular units or individual decided to mount it on a strip of cotton/muslin ?? even strips of bed sheets ?? so it could be taken off easily rather than sown on the jacket I am not sure. I can't believe it was due to a shortage or that the printing was 'home made' as they were wearing the sown on flag for practice jumps in Africa over the top of where their 82nd patch should be on their left arm.

I may be wrong but to date I have not seen any definitive evidence of oil cloth brassards in the MTO to make me think otherwise.

As for the Navy Dual-Purpose parachute rigs I don't believe these were ever used by the 82nd to jump with, they were only used for posed pictures so any pic I see them in I dismiss it and I dont use it for any authentic referencing but again I can't prove this so If someone has evidence of the 82nd jumping with these chutes I will stand corrected.

The below Sicily pics all show cotton/muslin arm brassards which were worn on either arm as you can see.

Well if anyone is after an oil cloth brassard definatly for 325th Normandy, 517th Southern France or 101st in Holland etc etc, the supplier I mentioned is great. Just go to the bottom of the new items page on his web site.

Thanks for posting up Tom. I have never noticed that in the first picture you have posted up just how made the brassard looks. It certainly does appear that the flag was sewn to extend it such as a bed sheet as you have proposed.

It would be nice to see an original or detailed pictures of one to confirm.

Tom Sainter wrote:As for the Navy Dual-Purpose parachute rigs I don't believe these were ever used by the 82nd to jump with, they were only used for posed pictures so any pic I see them in I dismiss it and I dont use it for any authentic referencing but again I can't prove this so If someone has evidence of the 82nd jumping with these chutes I will stand corrected.

Err, Tom - if you look very closely at the pic you posted up, you'll see the troops ARE wearing Navy D-P Parachute rigs... You can see the black rip cord attachment coming out of the pack in the top right hand corner. Here's a shot for comparison: 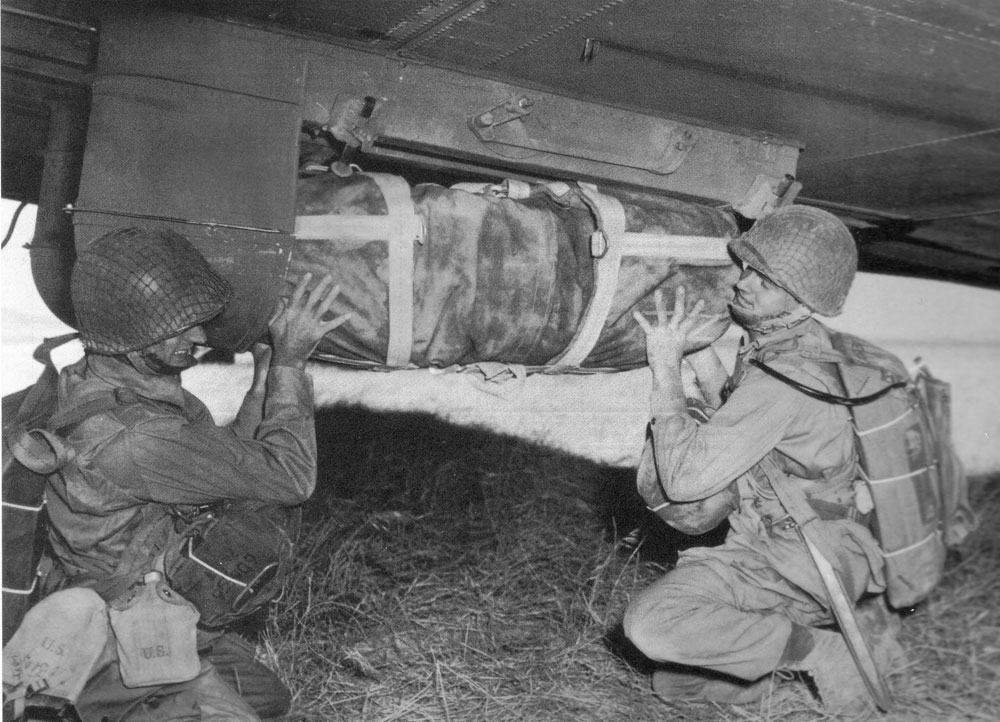 I suppose we'd better write the shot off for any reference then...

Hi Ben,
Yes mate I am aware these chaps are wearing Navy Dual-Purpose parachute rigs, I only used the pic to demonstrate the way the arm flag was tied to the arm.
These are from a series of pics of the 504th all of which in my opinion are staged just for the camera and are not of an actual jump. My train of thought is actually demonstrated nicely by the pic you have posted up of two guys loading an A5 drop canister while wearing their parachutes. I have never seen this done before or since as the planes were all pre loaded. Anyone who has ever been in a full rig before will know you can't move a lot so kneeling under a plane and manoeuvring a container around with just the two of you would be madness. The series of pics this is from are the only I have seen with the Navy rig so this is why I don't believe it was ever used for a jump; training or combat.

Yes, I wasn't suggesting for a minute that the guys loading the A5 weren't posing for the camera. However, the following comment was sent to me some time ago:

Years ago I asked LTG (Ret) Jack Norton -- who, as a Captain, appears IIRC in one of the same series of color pix taken planeside -- told me that the rip-cord chutes were taken up by SOME of the people of the HQ 505th PIR and/or 82nd, because there was a sort-of shortage of proper T-5s due to deterioration of teh silk in shipping and/or storage and becasue they were a novelty. The good T-5s went to the REAL combat jumpers, with the rip-cord types used by HQ "dogrobbers" (his term).

As an aside to all this, that one from Blunderbuss is hopefully being sold by them as a repro? As that's what it is... 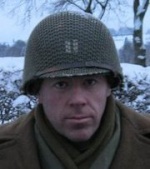 Just out of interest how do you know its a re-pro?

Because it's not a real one...

GlenM wrote:Because it's not a real one...

Very interesting topic there !! I didn't know there was so much to say about arm flags and co. I'll see what I can find in the States and will ship it to Paul (I think this kind of detail can be discussed during the AGM prior a group purchase).

As an aside to all this, that one from Blunderbuss is hopefully being sold by them as a repro? As that's what it is...

No they are selling it as original and for £65! Blunderbuss are usually quite good but I guess anyone can make a mistake. We discussed this issue at Trowbridge and I think we are going to work on doing our own version of the arm flags...
_________________
Murphette

Not wishing to labour the point at hand, but here's an interesting photograph I came across in Nordyke's book:

It shows Brig. Gen. Charles L. Keerans wishing Gavin good luck prior to the jump into Sicily. Notice that both men wear the oilcloth Brassard, albeit that the one shown in the background has been repaired / extended / added to a piece of cotton.

I agree ben, it's research don't worry you are not labouring the point. I think we may need to go with our own interpretation of the arm flags based on the available research and raw materials.
_________________
Murphette