2nd Armored in Europe comprises a number of like minded individuals from various groups including the living History Association, Belgian Friendly 101st and GI44-45.
On February 24th 2012, together with other Living Historian friends we took part in the very special 30th Anniversary of the, "Walking in the footsteps of the 82nd Airborne Division" organized by Emile Lecroix. To mark the occasion and pay our utmost respect to those that served we followed the route taken by the 508th Parachute Infantry Regiment of the 82nd Airborne, when they got their orders to move to the front in December 1944. This year rather than just walking in their footsteps we wanted to travel by road, in the same vehicles and the same route that the 508th PIR travelled 70 odd years earlier. To recreate history as best we possible could we also set out from Camp Suippes France to Werbomont Belgium, travelling 133 miles overnight in GMCs. 8 hours later we then participated in the march and pay our respects at ceremonies as well as later sharing a glass of friendship with like minded individuals , veterans and their families. These photos document my memories of the weekend, an experience most certainly not to be forgotten...

Our temporary accommodation at Camp Suippes

After the meal we march back to Camp Suippes with Mark Almond sounding the Cadence, hey Hey Captain Jack I have to say I got the shivers when this was happening. I doubt that Suippes has seen the like of this since the war.

It was really cramped in the back of the GMCs

Early morning and arrival at Werbomont

Paying our respects at the 82nd Airborne Memorial

Getting ready to march out

Advance party made their way to Bra, where breakfast of Bacon, pancakes and maple syrup is served, complimented with a D Bar Ration for each participant

No Job too small for Major Brian Perkins

After the meal break time to continue the march

During the course of the march the two platoons separated in order to take a Belgian Town. Here three squads from 2nd Platoon take 5, before moving out.

2nd Platoon, arrive and secure the perimeter as re-enforcements are trucked in

Although there is still time for rest as the weary GIs catch up on the latest news from Strictly GI44-45 (the magazine of GI44-45 Living History group).

Patrick Murph Murphy of Boston finds a GMC with a name-sake..

The village secured, its time to move out and cram back into the trucks and head for the ceremony near to the site where the G Company 508th had to re-take German held positions

We then make out way up to the former positions of G Co 508th, which were taken by the Germans and had to be re-taken by G 508th.

It was probably the first time since the war that a group of 70 individuals representing G 508th 82nd Airborne had gathered once again in positions held by the 82nd Airborne, to pay our respects.

Time to move out once again

The march concluded, it was time for a well earned Victory Beer

Awesome Paul!! Love the first few pictures in the back of the lorry. All smiles then very knackered looking faces!!

Look great chaps - I think you've done us proud there - well done to all.

Good work guys, and great bunch of picture Paul... so how cold was it??

Well done to all who took part.

Nice report Sarge ! Although I've done this event once, I'm sure each time is a different experience !! Good job to all who attended !! Was there a company radio operator ?? I haven't seen one in the pics.

Pat wrote:Nice report Sarge ! Although I've done this event once, I'm sure each time is a different experience !! Good job to all who attended !! Was there a company radio operator ?? I haven't seen one in the pics.

Just been reading through my 508 book, and it seems like we got it quite easy on the truckride. The original guys suffered freezing condition, most of them stood the whole way - and worst part is it took them EIGHTEEN HOURS to get from Sissone to Werbomont. We suffered half the time, double the temperature and a seat (of sorts)....

Just been reading through my 508 book, and it seems like we got it quite easy on the truckride. The original guys suffered freezing condition, most of them stood the whole way - and worst part is it took them EIGHTEEN HOURS to get from Sissone to Werbomont. We suffered half the time, double the temperature and a seat (of sorts)....

That really makes you think! We had it lucky with the temperature it was about 11 degrees, it was very muddy and damp but otherwise a beautiful day. Thanks for posting the pics. Paul, some of the best ever in my opinion.
_________________
Murphette 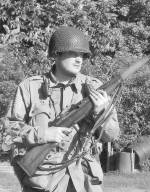 Yeah, really, really good photos Paul, i agree with Murph, some of the best i've seen us do.

18 hours blimy! I don't think I would be able to manage that one!

Paul a great write up and brilliant pics mate.
Well done to all that took part and I think I can safely say that 2nd squad, 2nd Platoon were the best unit out there

Thanks for your hard work chaps.