Neither the D ration or C Ration entirely filled the need for a special ration during WW2. The D ration was intended to allay the worst hunger of a single missed meal and the C Ration was considered too heavy and too bulky for most of the mobile units. It was felt there was a need for a sustaining ration of a new type suitable for parachute troops, tank corps, motorcycle troops and other mobile assault units.

First experiments began in 1940 by Dr Ancel KEYS (hence K Ration) and by 1942 tests were put in place to test the K Ration amongst other rations. The K Ration emerged with flying colours and it was generally agreed that the ration could be used with good results for periods of at least one week.

The initial trials in which the K Ration were tested involved comparisons with other allied countries rations.

The image above shows a ration carton, the earliest style that I can tell, this is the same design as the one in my collection.

Early in 1943 Cans were supplied lacquered, this was as a result of the packing companies reporting slight rusting to the non lacquered cans at their plants.

The rations were prepared on a production line and in my own experience and that of Paul Dray who also collects rations I have found that the contents do not always match what is recorded on the carton.

There were three styles of box, two are depicted above, The first was very plain giving just a makers name and the meal title.

This ration contained just a key, an un-lacquered can, which surprisingly was not rusty at all, the Biscuits etc wrapped in cellophane, and one pack of cigarettes.

The final styles of K Ration carton were known as Morale Boxes. These were issued late war. I dont know exactly when, but its reasonable to state that they were unlikely to be seen during the time of Normandy. My two Morale boxes have tins stamped in 1945.

A tin of unopened processed cheese, this one is dated 1 45

An unopened pack of Camels

A very plain matchbook-not like the ones that are seen in all those repro rations!

One of the things I have noticed with the set of three morale boxes that I got from the same source in Germany was that all had been broken along their middle. I can only guess that the reason for this is that the GI simple snapped the cartons in half, so as to get to the contents quickly.

An outstanding reference thread Paul, thanks for posting up the photographs along with it too!

Shame the boxes where damaged but still you have some nice original items there mate.

The "moral boxes", aye, had a few arguments on the US forum about that one Paul... As far as the QMC "bible" says; "In May 1944 it was said that the new package was going into full production"... given the rate at which boxes where in production, and the anticipated procurement orders for the "older" box types, it would have been some time for them to go into actual production and to reach the front, in my opinion, though it is said there is "a photograph" of one in the Bulge... Add to the pot the many different contractors making both the components and the actual packaging, then there's a rainbow of possibilities...

That is top stuff! Nice to think that this thread is really exploring and preserving a little piece of History.
_________________
Murphette

Hey there, Do you have any measurements for the tins?

It is nice to see all of they pictures of the real deal. same for bens c-rats post f the b-portion.

Really good stuff. I am still looking at filling one of Paul's crates with boxes and cartons, to show a full crate, at the time of Normandy. But still having trouble tracking down laminated cardboard rather than modern corrugated, for the main insert. I would guess then that that the correct ration boxes would be mid production rather than the morale boxes. Also would one crate have just one type of ration say supper, rather than all three types, breakfast, lunch, and supper?
Cheers
Richard.

hi richard, i got some thick card from a craft shop for the boxes, have you got a pdf for the print? i have one somewhere if you havnt. i stand corrected but all 3 units where packed in the same wooden crate, one row of breakfast, one dinner one supper.

For the K box I go to Staples and get the brown folders, think the last time I bought them they where £3 odds for a whole bunch... Now, print out and wallpaper paste onto a lighter shade pice of card, then fold and glue... As ye can see form the original here, the inside is a different shade, these boxes where made in layered cardstock (I reckon): 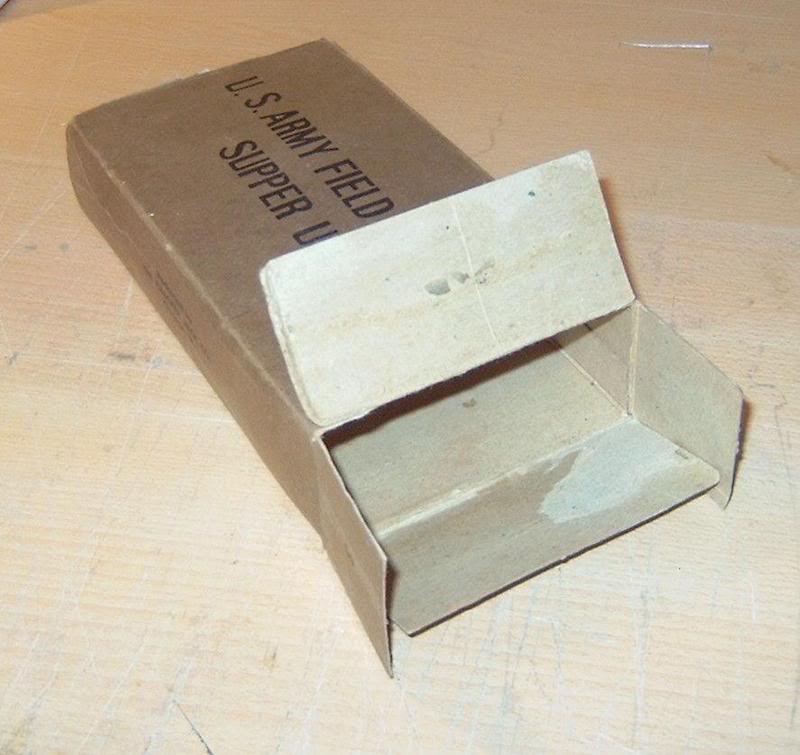 Now, the "early" and "mid War" boxes where supposed to be brown? Here's one for ye, and this is original: 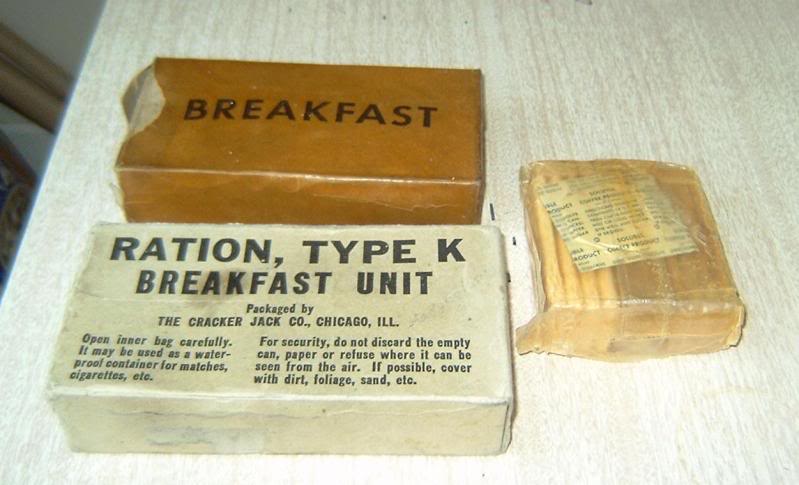 As ye can see, the outer non waxed part is almost exactly like wallpaper liner in colour, but is definitely the same in texture...

Now, here where I"m gonna shamelessly promote my own, these will shortly be going into production, not sure of the cost as yet, as I even go to the trouble of baking my own K biscuits:

The above can is as approx to the original as I have seen so far, but in the past I have thought about this for my production of the 10in1s for our field trip, which had "partial K rations" for the dinner menu included in them, and here is the choice I considered, on the left is the Tesco spam like product, middle original, and the right Spam Spreadables (in the end I chose used in the Spam Spreadables and produced the snug fitting box for it from scratch):

Just to clarify, a "ration" was three boxes, "breakfast, dinner, supper" as in a "days ration"... So for example, when the QMC talks about a ration, it's a whole days ration...

Some new intel in. Taken from a recently acquired Yank Weekly dated April 21 1944.

Morale boxes- soon to be issued, once old stock is used up.

Interesting, thanks for sharing Paul.

murph wrote:Hmmm, bet the contents remained as unpalatable for the GIs.