On the weekend of the 23rd-25th of May, GI44-45 had the great honour to be aloud to under take a historical  camp on the original land of Camp Quorn in Leicestershire, to remember the 505th PIR who called this little piece of England their 'second home' from Feb 1944. It was 70 years to the day that the 505th were spending there last weekend on camp (unknowingly) before getting shipped out the  airfields for some to see combat again and others for the first time. With this in mind we wanted to recreate a little snap shot of history for ourself's and the VIP's we were very excited to be hosting. To remember what those brave young men had done and were about to do!

The Friday saw members come near and far, bring heavily loaded cars packed full of kit to start the process of setting up the camp. With the weather for the weekend not looking so promising it was time to get those tents but before then next unwelcome shower came. It was every hand to the pump and with a few hours we started to have something that was looking like a mini WW2 tented city. With the rest of the company stuck in invasion traffic we thought it was time for some team bonding in the form of Football and Baseball! As the hours past and the rest of the company turned up, and the camp was completed before night fall. Then it was time for some famous Quorn fish and chips. The troops would often end an evening after a drink or two by getting fish and chips on the way back to camp or jump the wall of the camp to do the same. So in keeping with this we did the same (through the gate) 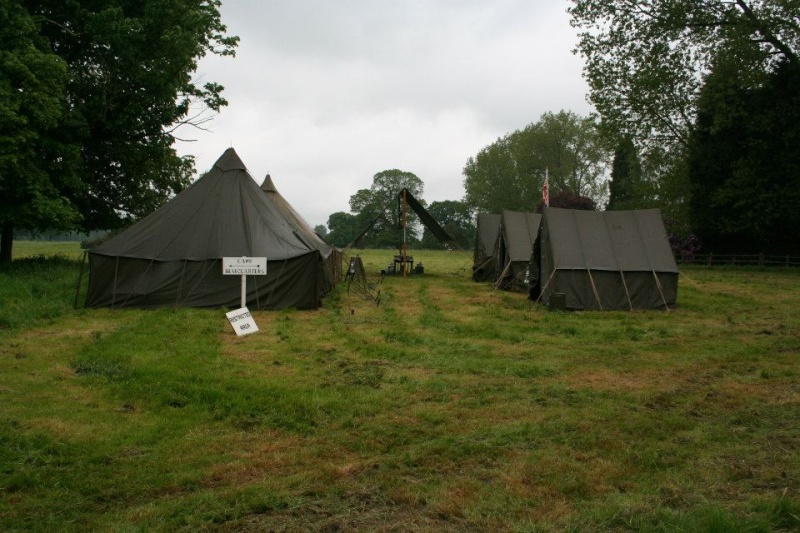 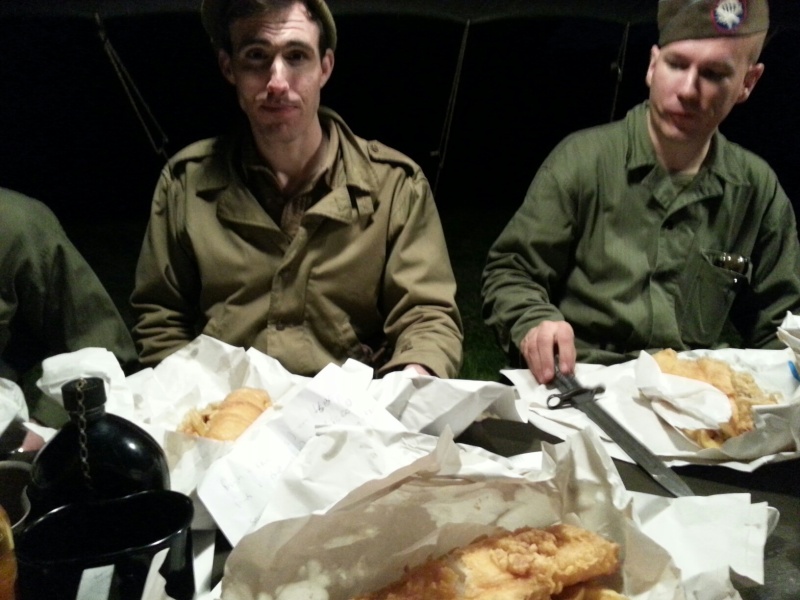 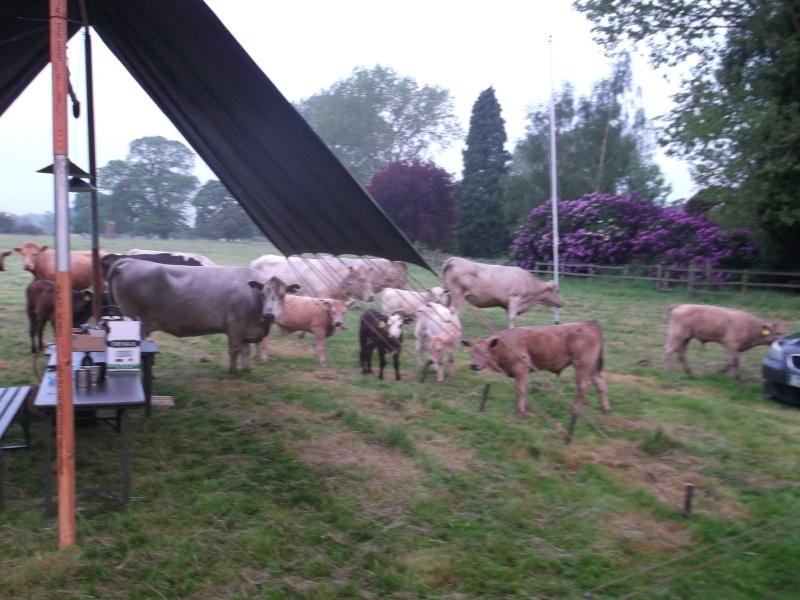 Saturday morning saw us fighting are own invasion, this time it was seeing off the four legged kind that laid siege to the camp.  Pvt Moore and I only aimed with our training and wits saw off Daisy and her army so that the rest of the camp could sleep easier in the cots. Day break brought a welcome hot breakfast and a cup of Jo, but not before Cpl ODwyer put the Company through there PT training and Fitness test. You guys really deserved your breakfast that morning! With everyone rested and feed it was to the job in hand training the guys for war, Sgt Maddison hosted classroom based cinema lectures and field tactics. With the afternoon approaching and the arrival of our VIPs it was time for a quick lunch of chilli dogs and again all hands to camp cleaning and getting the place looking the best we could to host our VIPs. 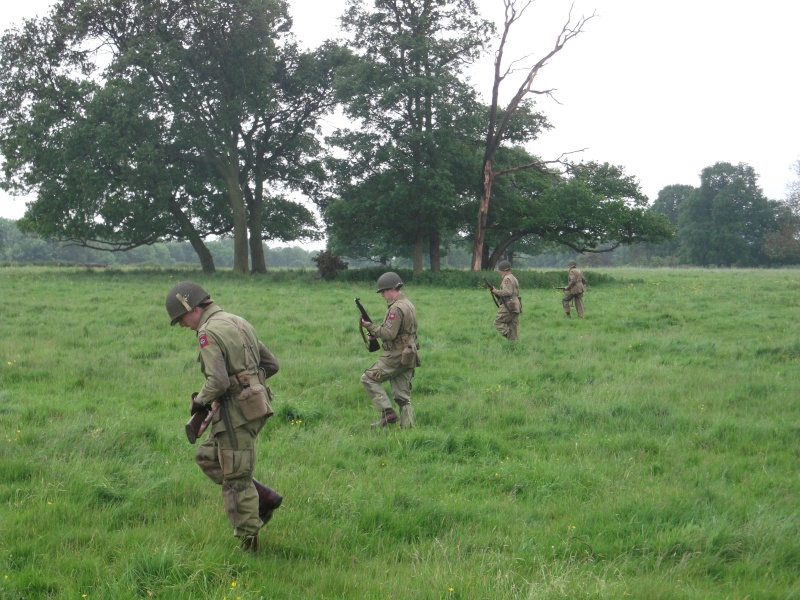 Our first VIP to arrival was Deryk Wills and his wife Anne, Deryk is an honorary member of the 82nd Airborne and author of  put on your boots and parachutes a personnel account of the troopers of the 505th PIR. Deryk and his wife spent some time with his on camp sharing stories of his service and the memories he has of hosting 82nd Veterans and times spent with them. Our next VIP was a local author and historian Vincent Holyoak, Vincent has just released a book on wartime Leicester But for these thing which includes some very interesting reading on the 82nd time in the county. 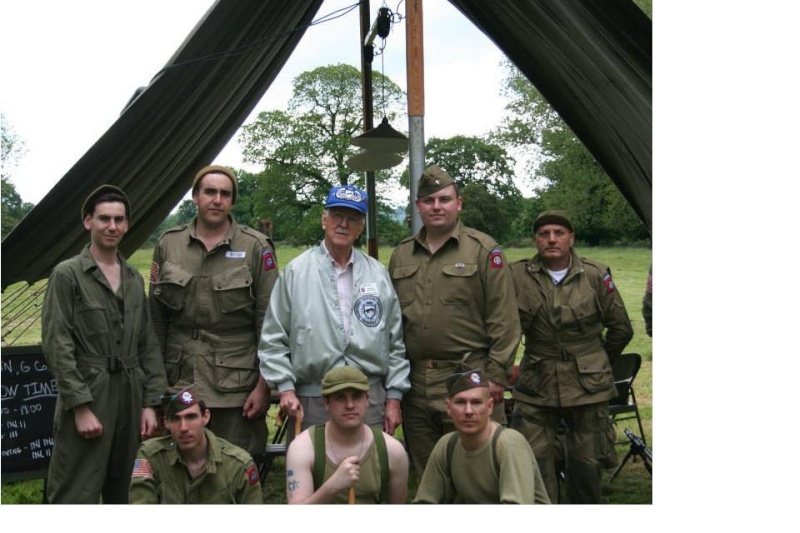 With the departure of Deryk and his wife we hosted our next VIP Ernie Lamson A Com 508TH PIR and Dick ODonnell 508th webmaster and president of the 508th association. It was a real If you build it they will come moment to be able to have the honour of having a real 82nd trooper on our camp and hear Ernies stories was a real once in a life time opportunity. One which I know myself and the rest of the group wont forget in a long time. 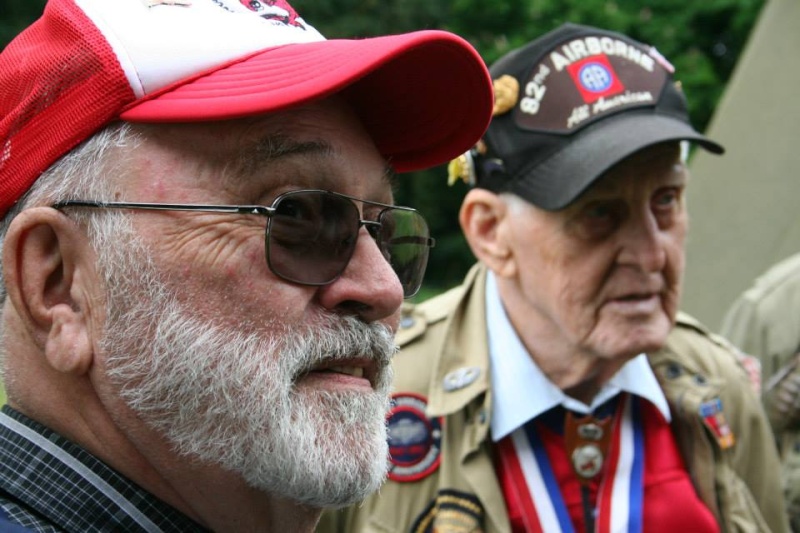 In gratitude for our VIPs taking the time to come see and speak with us on camp and in the memory of the 82nd Airborne a cake was baked. We asked Ernie if he would do us the privilege of cutting it. 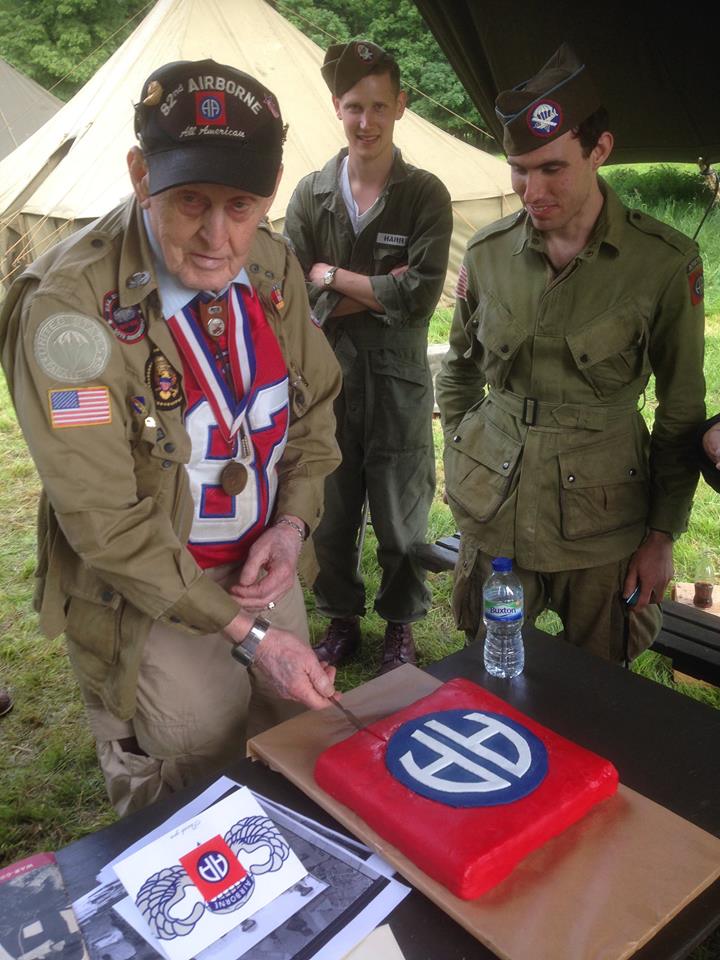 With the departure of all our VIPs the Company hit the Village of Quorn to sample some warm beer and fine food. We remembered friends that have been and gone, with a glass raised to the All Americans who often found them self rubbing shoulders with the locals in the different water holes of Quorn. 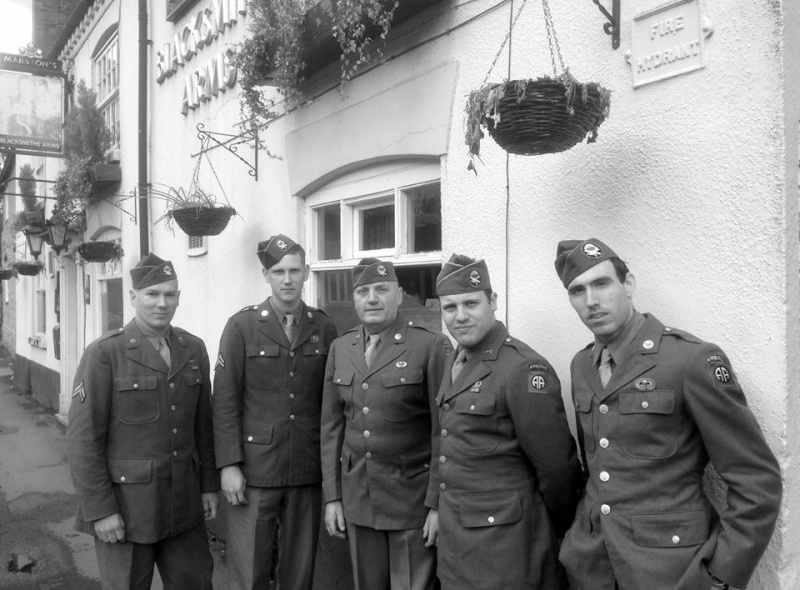 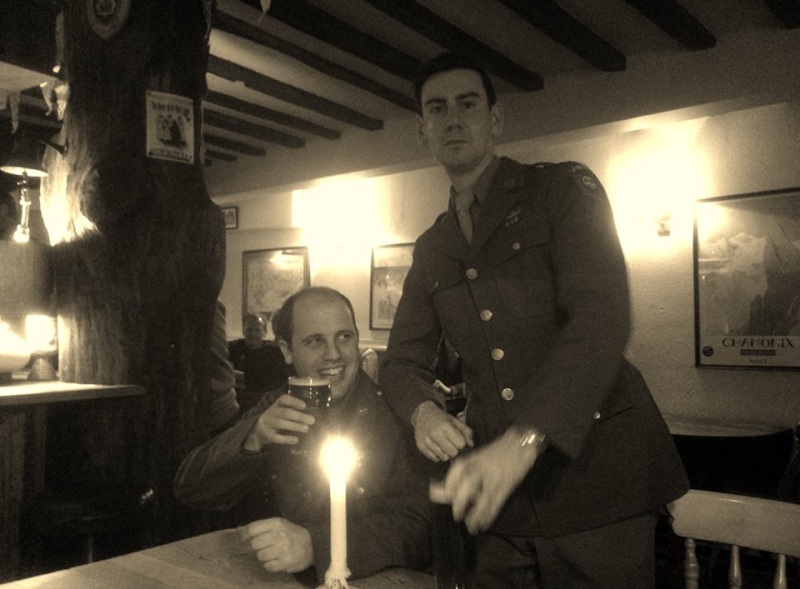 Sunday morning came quickly with every member of the company making it back to camp in one piece. Thankfully Cpl ODwyers PT session was cancelled, and the troopers had an extended time in bed.
With everyone awake and looking more fresh we got ready to march into Quorn to lay wreaths at the village war memorial. Thankfully the skys cleared, the sun came out and we could take a moment to remember the 505th in this peaceful memorial garden in the centre of the village where a plaque has been laid to the troopers of the 505th. From here we visited the second plaque in the village in Stafford park under the 82nd gate. 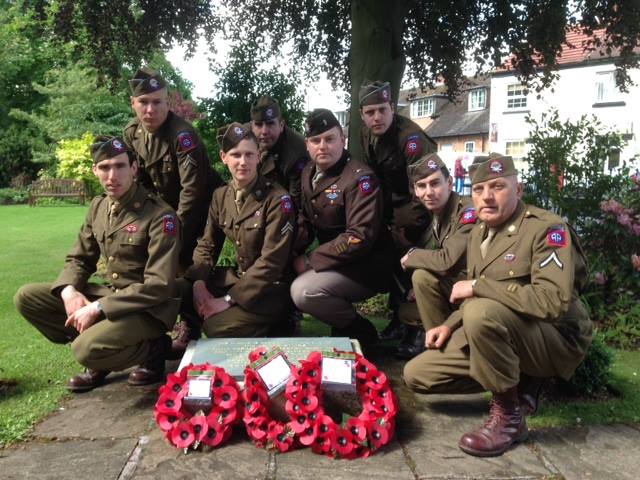 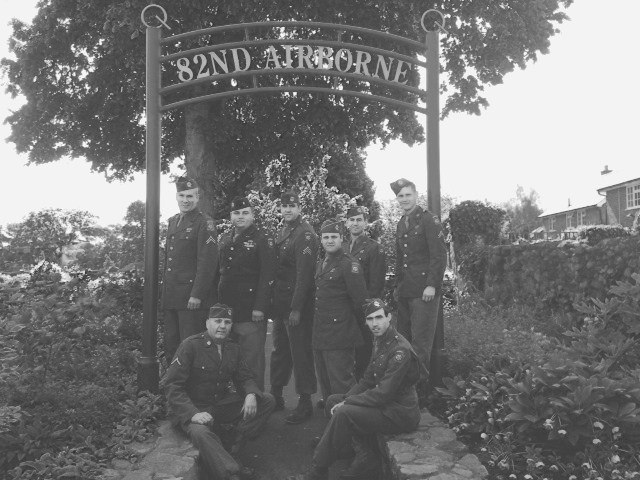 By this time the camp had dried out from the weekends down pours and we thought it best to try and decamp with the weather in our favour and start the long or short trips back home. The weekend was a one off special event that had many highlights for individuals and as a group. It took some doing but when a group of like minded friends come together it just shows what can happen!

A special thanks to each and every member of the group who went the extra mile to make this what it was.  Smokey for his help every step of the way and of course Rosemary and Peter. Deryk Wills and his wife Anne, Ernie Lamson and Dick ODonnell, and Vincent Holyoak,

Airborne all the way! 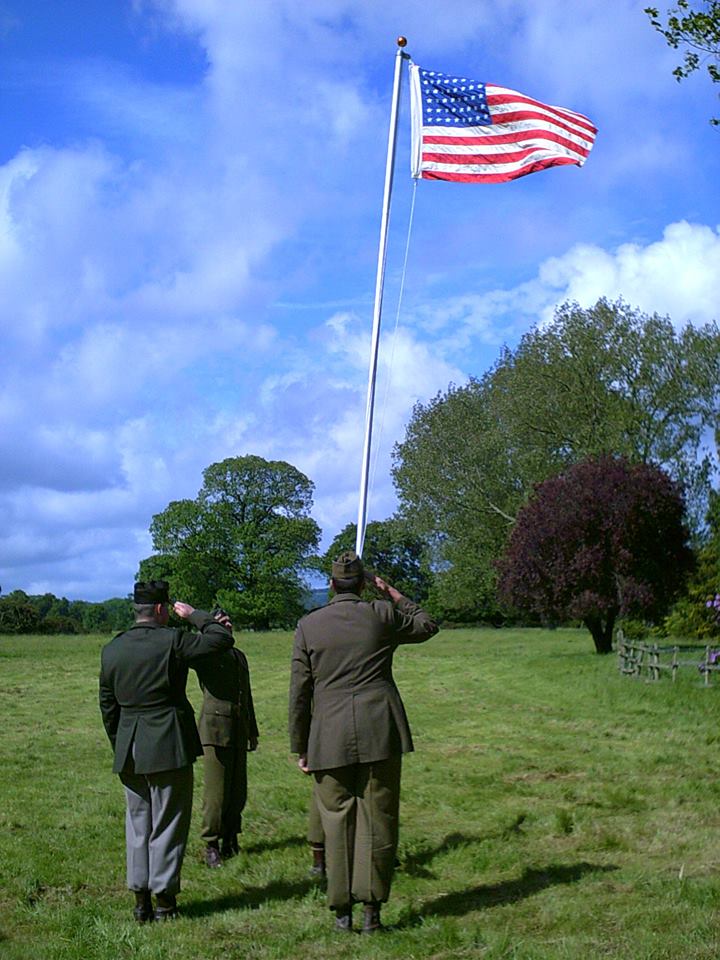 Great report Daz on a very special and memorable weekend!!!!!!

A great weekend indeed! Thanks for opting Daz and well done 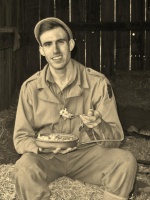