Gents, just a few photos for your info/interest etc regarding a couple of the differneces particular to this division

Firstly the modified M43 jump pants as used by the 513th PIR. I've often asked when the 17th had their M43 pants modified in the distinctive style only seen by the 17th Abn. I'd always assumed because I handnt heard anything different that it was done by the Div riggers prior to Varsity. After some digging it would seem to me that this is not the case and numerous troopers had them when in the Bulge.
To give you an idea of the doc specific modifications to the regulation M43 pants I've taken a few photos of mine and compared them against a pair more often seen in use by troopers from the 82nd/101st.

Firstly the pockets themselves are in terms of design, cut in the same fashion to that of the more commonly seen ones. 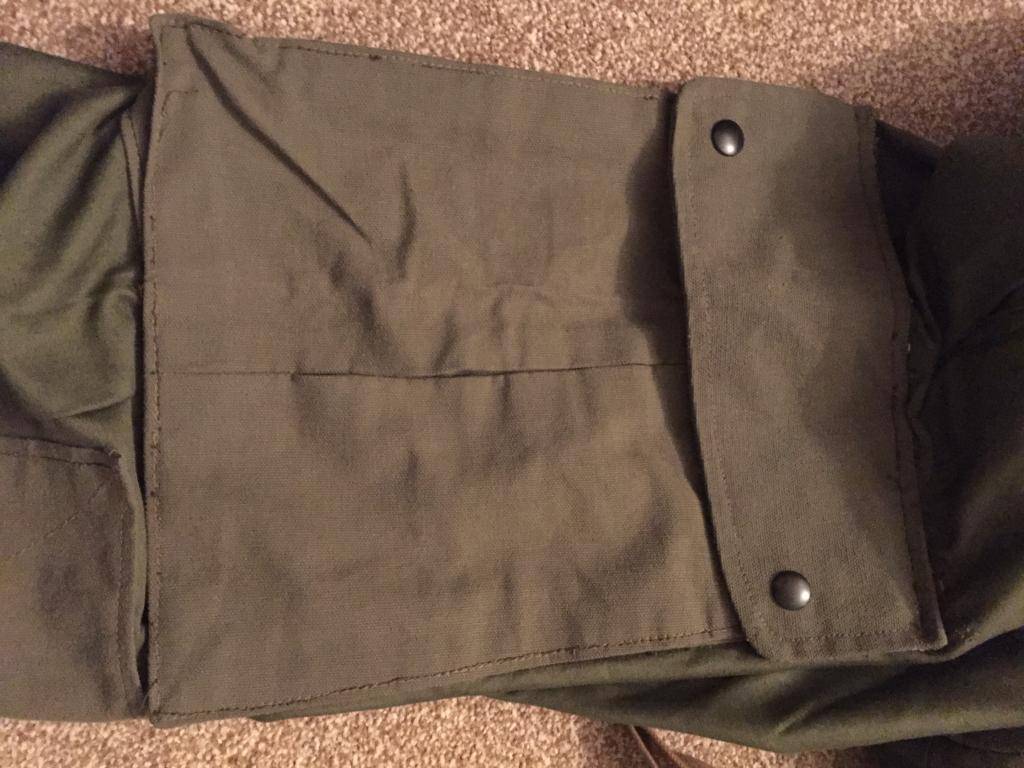 The leg ties used are of 1" web tape. When looking at period photos the ties stand out quiet markedly against the green of the trousers. 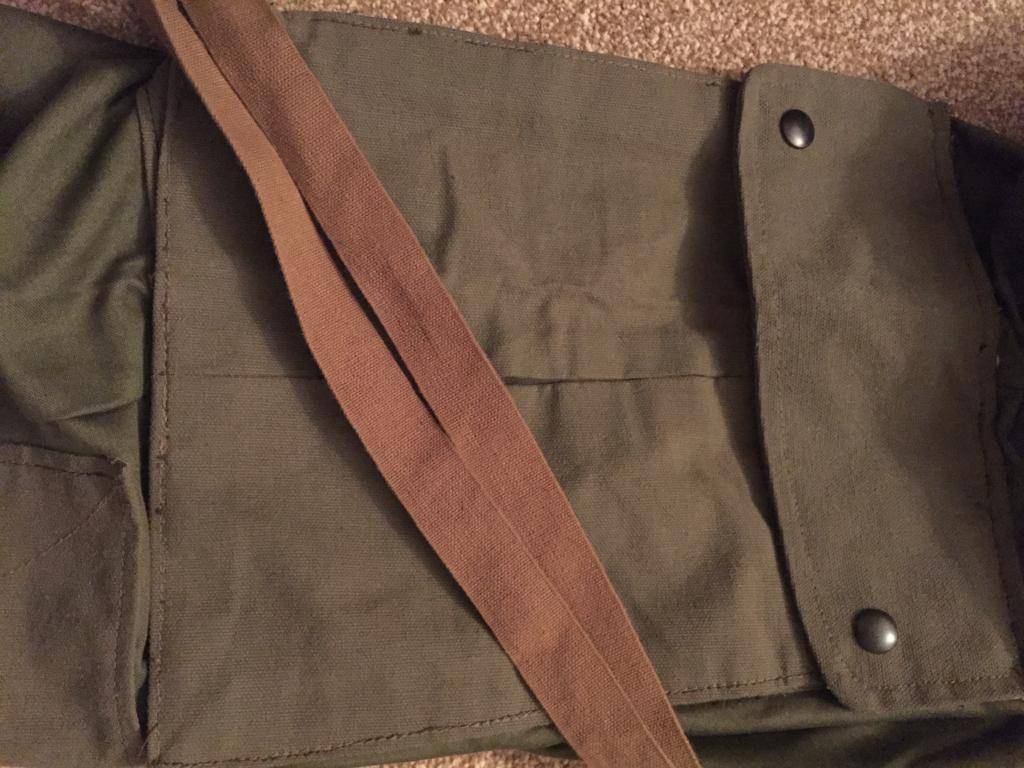 When compared against the 82nd/101st type the increase in size is noticeable. Sewn into position at the same point on the leg there is roughly and extra inch in depth. 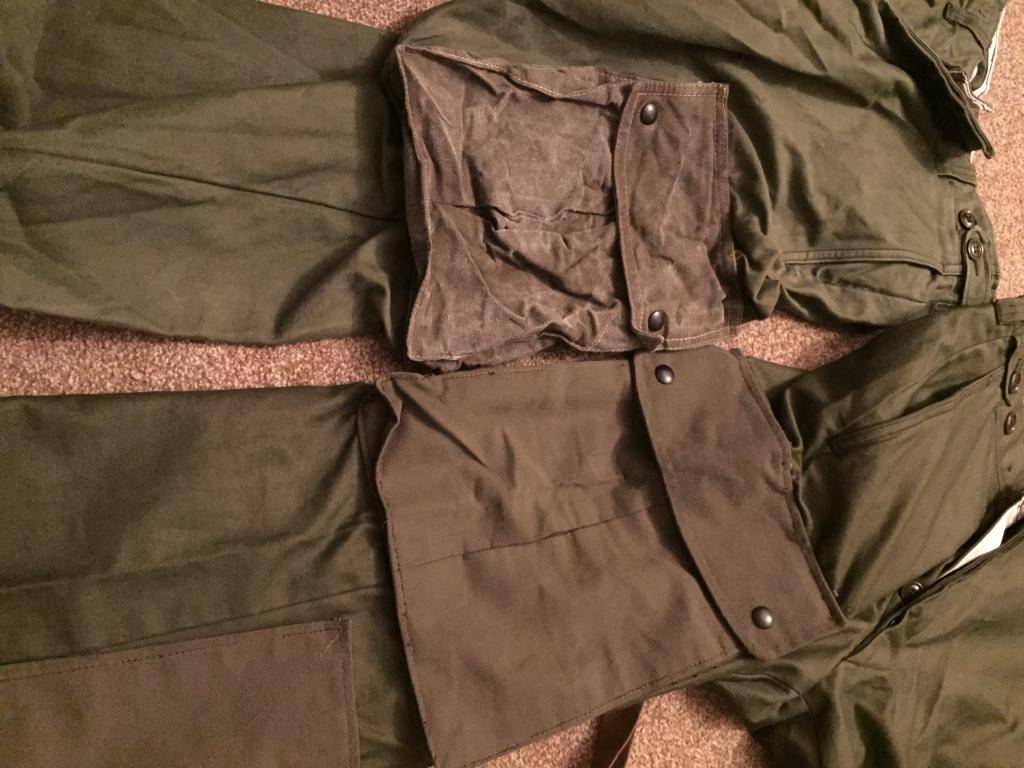 The last noticable difference is the knee patches. Large in size, and I'd say bigger than those seen on M42 pants, they typically had a cross stitched over them and this can be seen on originals. 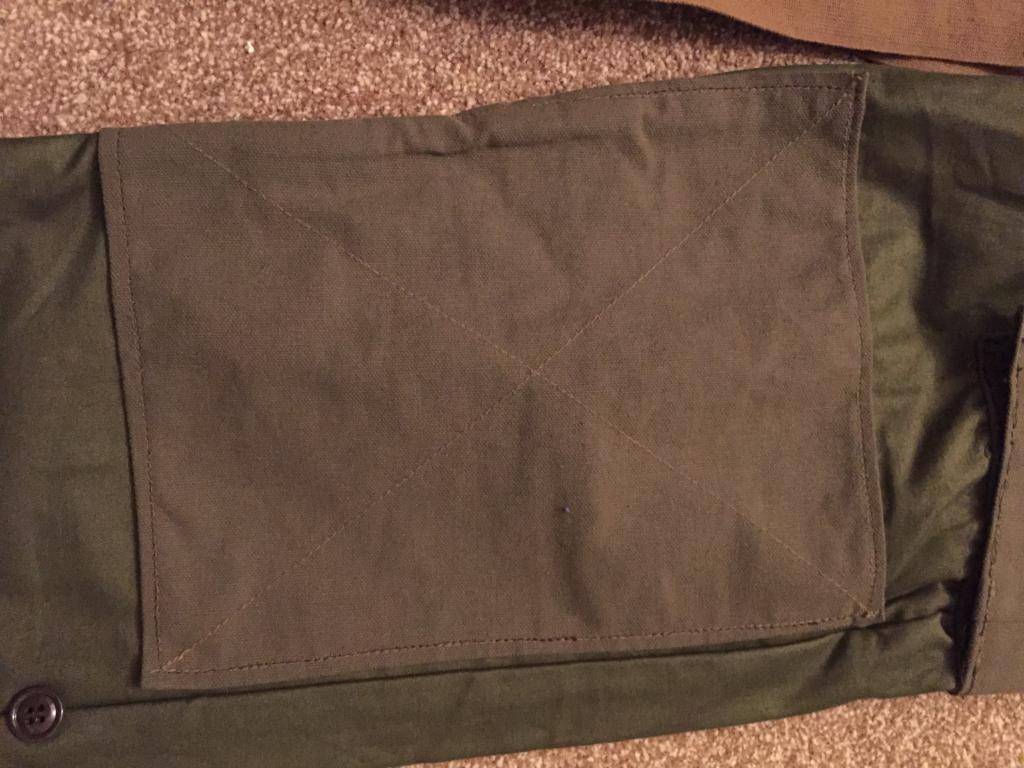 Next up a few photos from the time of the 513th PIR in the Bulge.

The first shows divisional troops with a group of surrendered Germans. Of note is the NCO with the M1. He is wearing a 17th Abn SSI, something rarely seen by this division and I've only seen one other that I can think of where a trooper has one sewn on. The other area of interest is again his M43 pants, the larger pockets and leg ties can be seen. 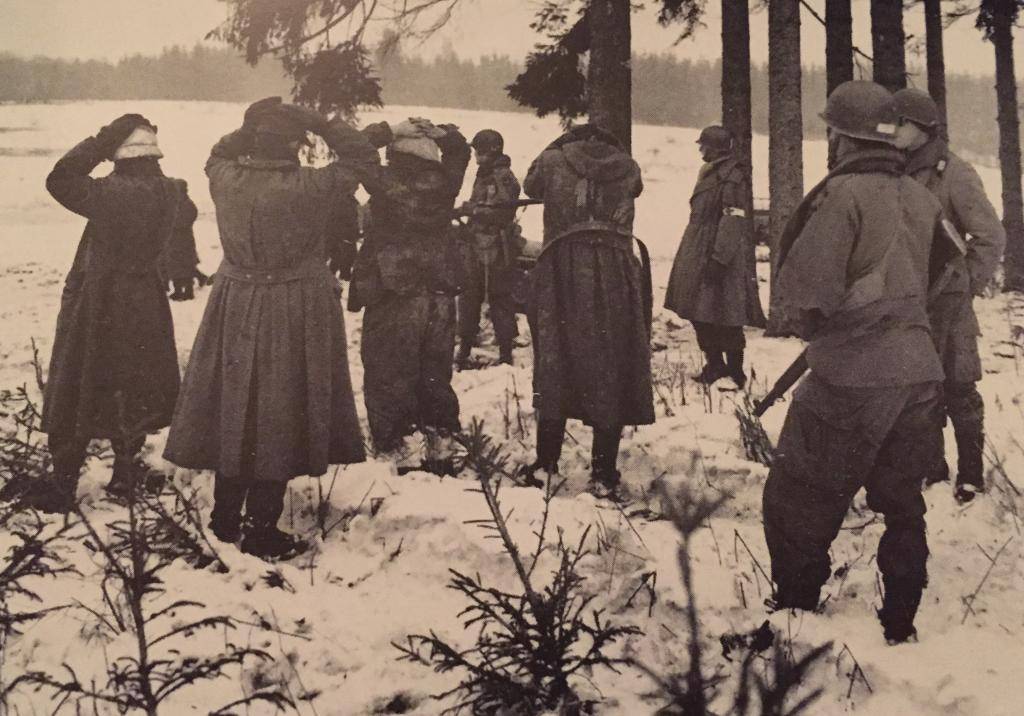 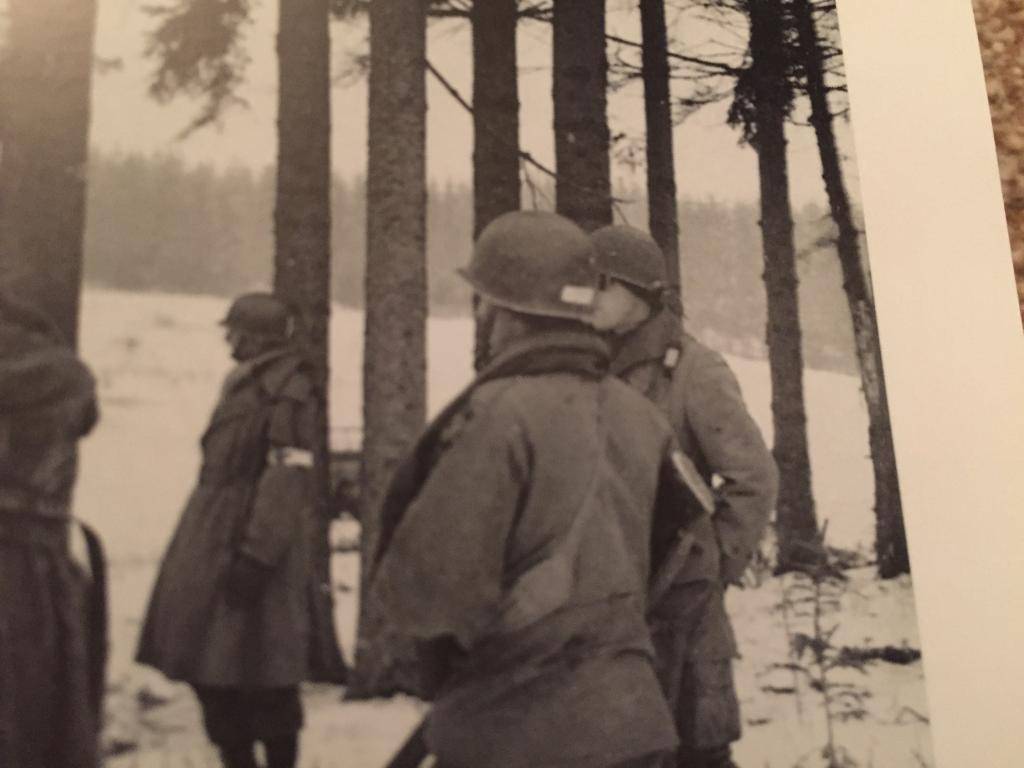 The next is of A Co,513th PIR as they were photographed on the move to reserve positions near Senonchamps. On the first two troopers closest to the camera and the trooper with the tree branch sticking out of his shoulder all have distinctively faded patches on their knees. Now given how the treated canvas turns grey with use/washes I beleive this clearly shows the modifications mentioned above in use in the Bulge. 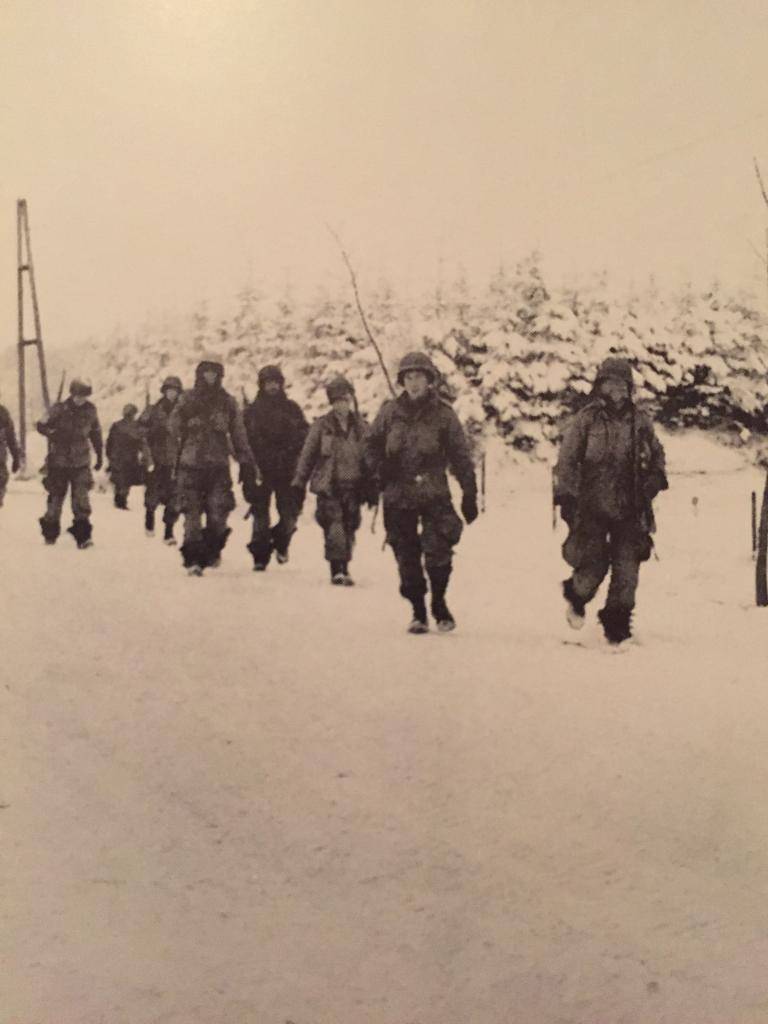 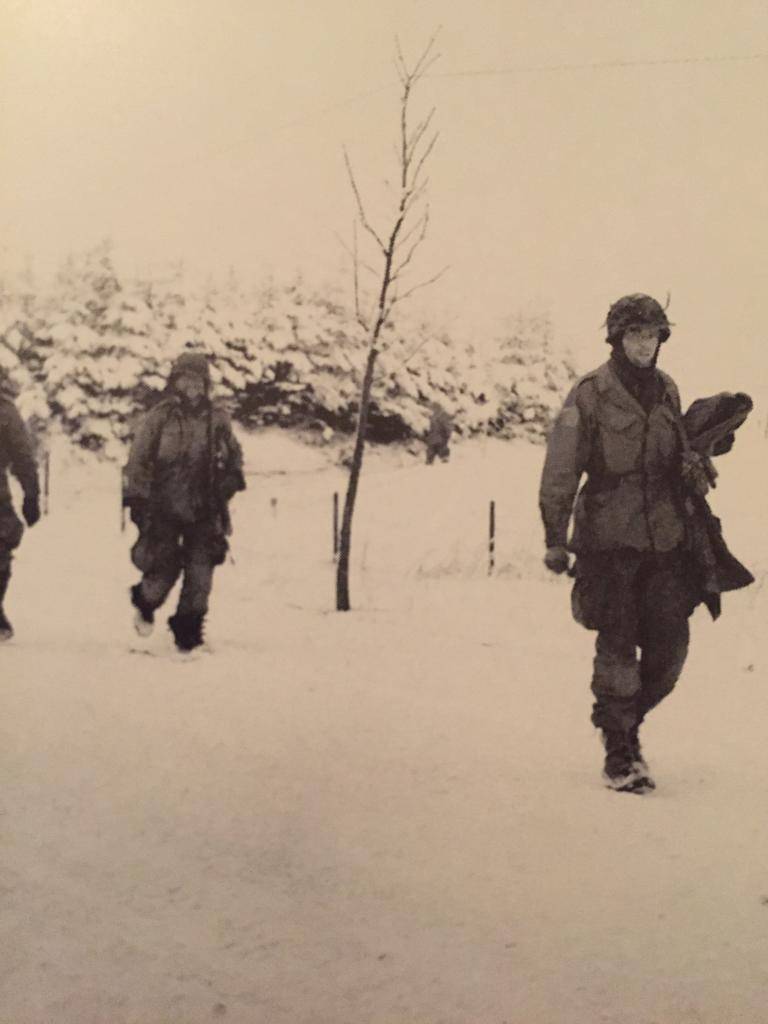 The final photo shows troopers of the 513th PIR moving up the line to Liheraine on the 21 January 1945. Note the amount wearing white sheets over the helmet. 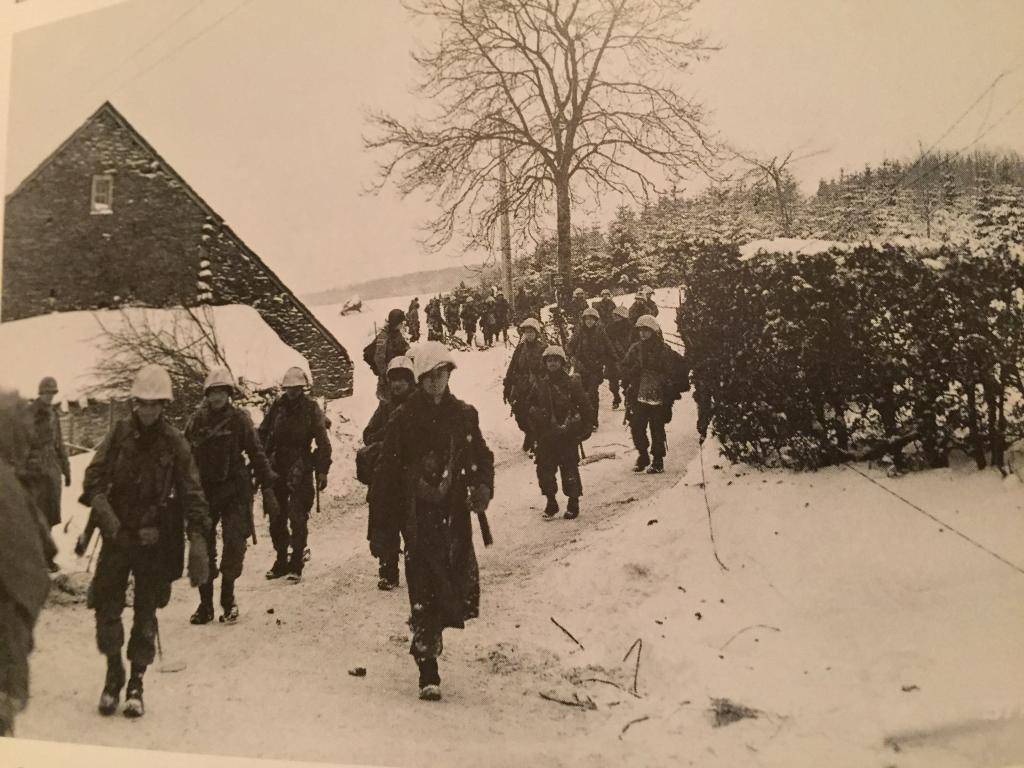 Hope they are useful!

Glad it's of use. Now I've found those photos I'm definitely going to be wearing my 17th Abn style M43's on the March. Had them 4 years and never worn once!

Nice referenced material there Jon, thanks.
Would I be right in thinking that the 513th where the only unit in the 17th AB though that had the knee patches?

Tom Sainter wrote:Nice referenced material there Jon, thanks.
Would I be right in thinking that the 513th where the only unit in the 17th AB though that had the knee patches?

Tom Sainter wrote:Nice referenced material there Jon, thanks.
Would I be right in thinking that the 513th where the only unit in the 17th AB though that had the knee patches?

As far as i know yes

I have seen pre Varsity photos of glider riders sat next to their Wacos waiting to leave with the bigger pockets and knee patches!!!!!

Ill try and dig it out but it goes to show that when you think you finally understand something theres a photo lurking out there to balls it all up!

Like the 82nd POW paratrooper in Normandy wearing buckle boots i found today.... 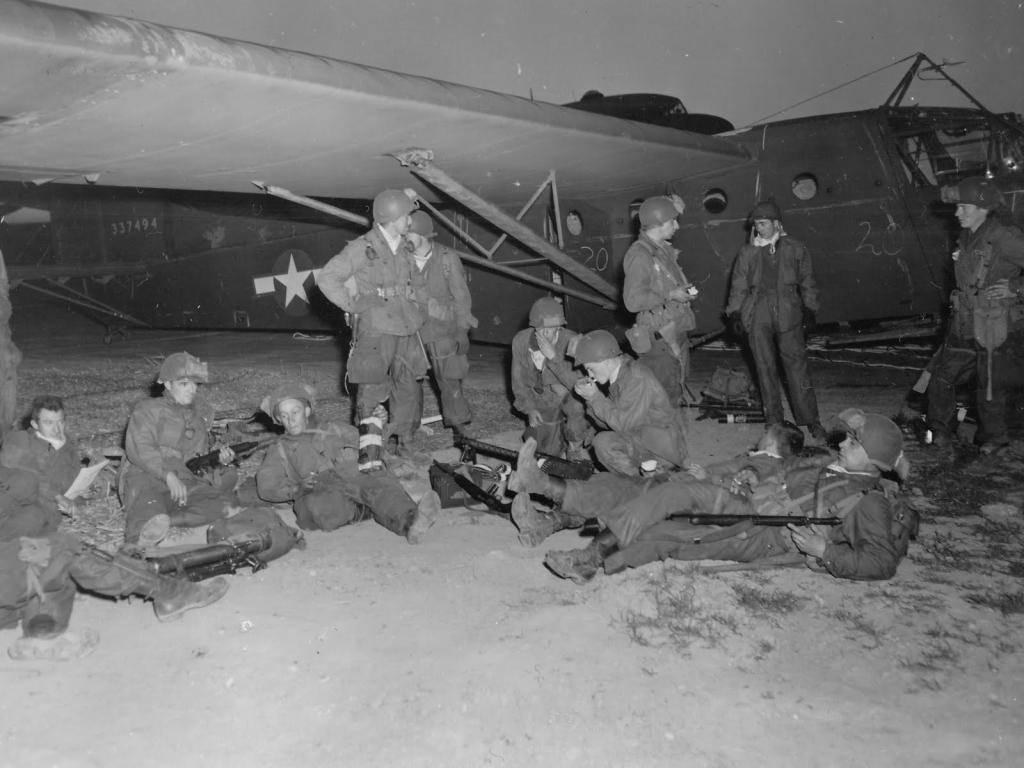 Note the trooper on the ground with his headto the right of the photo. Clearly shows reinfored patches on the trousers.

Not sure which GIR but definitely not paratroopers.

Id say it is a safe bet that throughout the whole Div this modification was carried out by the riggers just not all troopers opted for it or maybe it applied only to those who had been in the division longer and it was a practise only done for a certain amount of time so replacements didnt have it carried out when they turned their M43's into their riggers.

Cool stuff, nice pics. Thanks Jon that has answered a few questions I've had for a while.