IMO, the only way to get good ageing is sun bleaching. Not of much help this time of year

. As Dan said, wear and tear, is the only way to make it look realistic. Washing helps, I know people that did this in basic training to avoid looking 'green'

. Handwashing with a stiff brush is best but wearing it everywhere gives better results.

Dantheman wrote:I think everyone has an opinion on m42 jumpsuits Jon, I believe it's just a case of taking everyone's comments on board and trying to make an educated judgement.

Personally I have always been a big fan of ATF and their jumpsuit. It seems to tick the most boxes for me. The ww2 impressions suits were always renown for being a bit 'green' although the cut and general product pretty good.

In the last year I have been lucky enough to acquire an original un-reinforced m42 jacket. There are certain attributes with an original that I have to say an repro is yet to be able to 100% copy, mainly the feel of the fabric (probably down to the age and wear of it) and period cut of it. That said, ATF, WW2 imps and shock horror, some of the Chinese repro have been able to capture pretty well.

Have you seen the new run of WW2 imp jumpsuits? I have to say, they look bloody good and would love to see one in the flesh. I'm currently after a new un-reinforced suit and ATF don't have any normal sizes in stock so I am tempted to go WW2 imp. They come at a price but do look the biz,

With regard to ageing, I agree with Jon. Just wear them, be it in the garden, doing jobs outdoors or even leave on the line for a few weeks for a bit of genuine ageing by the elements.

Dan, I'm the same ATF suits have always been the M42 of choice for me, however now they are Chinese made and not US it makes me a little concerned about quality. I know he rants on about anything and everything on his website but I've now got both a US and Chinese uniform from ATF and the US one is a better suit. The colour of my WW2 Imp aside and the jacket size being a little tighter than it should for the indicated size it is, dare I say it better than ATF! The leg ties (they are the 82nd type) are spot on and the stiching etc (if you are a stich Nazi like myself) is very very good.

I also have some made by SM Wholesale which I must say their standard M42's are very very good but I can't speak for thier reinforced type.

I think it'll be hanging on my washing line from now until the summer and I'll also be wearing around the house/garden, probably at great annoyance to the misses but never mind!

Next time I go to the US I will be getting another reinforced jump suit from WW2 Imp but their latest run as I think my ATF one is getting a little tight these days!

Tony, I know what you mean about new recruits trying their hardest to look like the old and bold, I may have even done it myself back in the day!! It's funny how the old guys like new kit and the young lads only ever want kit thats been through the wars!

I like your comments about the new guys wanting old kit Jon and vice versa, so true.

All the above seem to be good suggestions, the best one of all is just wearing the uniform. As a combat/fatigue uniform I'm pretty sure they would just be full of grease/oil stains and who knows maybe even a little deer pucky smeared about!
_________________
Murphette

The washing line trick does work and you have allot of time until you next wear it to get it nice and worn. I agree with Dan's comments RE jumpsuits but like you jon I'm concerned about the chinese stock ATF have now.

Personally you can never say 'who does the best' as things do change. For example a few years ago you would never get me saying 'I like SOF's m42's but I'm really happy with my unreenforced one both in quality and price so won't cry if it gets fucked, unlike my old school ATF one!

Despite it being the ATF owners usual ranting style of writing this article which I read last night at work is quite interesting when determining the OD3/Khaki colour of original kit.

As you've seen the pics of my WW2 Imp M42 I was very conscious that it was too green (Its currently outside suffering the weather to fade it some more but...) and after reading this its interesting to see numerous items of original jackets etc next to each other and how the colours differed and even those used in SPR (Riebens M41 is shown)

Also for those of you who follow Jim 'Pee Wee' MArtin on FB, he recently visited a museum in Iowa (I think) and one of the photos did show 2 M42 jackets, one a lighter colour, the other much more green in appearance. Although I can't say for sure I can only assume they were originals

Hopefully that article makes for an interesting read and despite his aggressive writing style I agree with the statements he makes.

That is an interesting article Jon.  There does seem to be a little more debate these days about what exactly is the correct look for uniform.  if you can get past his ranting approach this article is well worth a read.  There are a lot of myths that need to be dispelled about the period we represent.   If we are going to evolve as I think we are evolving the kind of work we do and displays we put on will change to reflect this greater understanding.
_________________
Murphette

I think one of the biggest things, as with Brit battle dress it's important to remember that many different companies/mills etc made uniforms following Govt contracts with different sub contractors supplying them so finding uniforms that are just that - uniform, probably never happened in the truest sense of the word.

Even today, the PCS that we wear on ops comes in different shades straight from supply, so even with modern manufacturing processes, our uniforms vary in terms of colour.

The debate over colour and cut of M42's will rage on for years yet - as there IS no 'standard' type of original to copy. It's quite rightly been said that the best way to 'age' them is to wear them in the field and let them suffer the mud, blood, grease and general crap they come into contact with. Only when it can just about stand up on its own and be smelt from 50 yards away will it look the dogs.

I've tried them all over the years - from the orange Blunderbuss ones to SM Wholesale, WWII IMP, SOF to the latest ATF and all have good and bad points. Deliberate sun bleaching is a dangerous option usually as you never know what the dye is going to do and you may end up with nasty shadowing everywhere. And NEVER machine wash anything!

So, if I had to choose right now - I'd wait until ATF re-stock for the summer and they have the full range of sizes and just wear the hell out of it.

And just make sure it has decent insignia on it too, pref original - and a decent armflag if its an 82nd one. 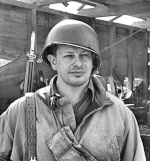